Sheltered by high cliffs, Dieppe stretches on both banks of the River Arques, a river whose bed has cut deep into the Pays de Caux’s chalk table. For a number of centuries, Dieppe was a major fishing and trade port, from whence many departed for far away lands. Home to the “Calète” Gaul tribe, multipurpose Port, the oldest seaside resort as well as the closest to Paris. Dieppe’s history has been closely linked to the sea since the city’s origin.

Up to the mid-eleventh century, the confluence of the Rivers Eaulne, Béthune and Varenne created a deep estuary surrounded by steep hills. This natural haven offered secure mooring to local fishermen and travelling sailors. Fisheries developed in that basin and nearby saltpans were mined for years.Drawn by this natural feature, the Normans established a harbour; it became the major port of Normandy as well as the communication node with England from 1066 with William the Conqueror, and up to 1204. At that time, the haven was simply a pebble ridge blocking off valley access, with the sea on one side and swamps on the other. On this baymouth bar, Norman chiefs founded the first Dieppe settlement.Starting in the Middle Ages, herring fisheries brought great wealth along the coast. Around 1300, Dieppe became the supplier of fresh fish for the city of Paris via a regular carrier service called “chasse-marée”, i.e. “tide-runner”.Dieppois sailors: discoverers of faraway lands

Dieppois sailors sailed the seven seas. In the 14th century, adventurous sailors reached the African coast at Cape Verde. In 1402, Jean de Béthencourt founded the Kingdom of the Canary Islands. In 1488, Jean Cousin discovered Brazil. In 1562, Jean Ribaud explored Florida. Gabriel de Clieu introduced coffee-tree cultivation in the Caribbean. The most renowned local sailor is Jehan Ango. He was born in Dieppe in 1480, the son of a ship owner. In 1523, he financed and sponsored two Florentine brothers, Jerôme and Jean Verrazano, who on board ‘la Dauphine’, their ship, discovered America’s east coast and founded “Angoulême”, later to become New York’s location.

At the end of the Middle Ages, two boroughs faced each other across the harbour: “le Pollet de Dieppe”, now called the Bout du quai (Quay’s End), and “Le Pollet oultre l’eau”, the present Pollet neighbourhood. At that time, a ferryman ferried people back and forth between the two banks of the River Hable. The stone bridge was built in 1511.In the 16th century, maritime undertakings were expanding fast and flourishing trade activities developed in addition to fisheries. Dieppe Harbour however only had limited space to accommodate the many vessels: a single basin, obstructed upstream towards the river by the stone bridge. It was not a tidal basin. Thus silting and pebble deposits prevented any vessel movements at low tide. 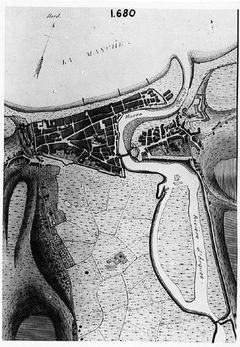 Under King Frances 1 and his successors, major building works were undertaken and the city lived a Golden Age nurtured by its maritime activities. At the time, a most renowned school of cartographers was founded there. Dieppe became one of the first ports from which to embark for Canada. It was also the departure point for expeditions to Guyana, the Island of Reunion and the Caribbean. Many a Dieppois sailor ventured and conquered islands, as did Pierre Belain d’Esnambuc in the 17th century.

In 1672, following a major storm that obstructed the port with pebbles, Colbert, serving as Minister of Finances to King Louis XIV, came to Dieppe to look into a restoration programme. Unfortunately, in 1694 the buoyant activity and reputation of Dieppois privateers led to an Anglo-Dutch fleet bombing the city as an act of retaliation. The city was destroyed, its fleet and its harbour in ruins. Engineer de Ventabren was ordered by King Louis XIV to proceed to the port’s reconstruction. Military engineer Vauban designed a plan to improve and expand it. Civil engineer Trudaine then implemented this plan in 1776. In the 18th century, the Pollet peninsula was split a first time when the Flushing Canal was built to flush sand out of the Dieppe harbour. A holding basin and locks were dug in 1778.

Works carried out in the 19th century

New basins were dug at the beginning of the 19th century. Between 1800 and 1880, three dry docks were constructed in Dieppe’s harbour. They have since become longstanding features of the Dieppe port-scape; each has an explicit function, related to the Port’s activities. • The Bérigny basin: Dug in 1806, construction extended up to 1839. It was expanded in 1866, then filled in before the Second World War.• The Duquesne basin. Designed between 1839 and 1848 to deal with increased traffic and the difficult access to the Bérigny basin. Under the Bourbon Restoration, Dieppois sailors sailed to Newfoundland and Iceland.• The basin de la Retenue. Because of the ever-increasing number of vessels, this new basin was built between 1866 and 1870. Charles de Freycinet, Minister for Public Works, then did away with it.The port kept all its features up to the 1880s, when the second industrial revolution called for a transformation in order to accommodate vessels of larger tonnage. In 1843, the rail connection between Rouen and Paris, followed a few years later by the Rouen and Dieppe one, offered new prospects. In 1793, a sailing ship named "Les Frères Royaux" (the Royal brothers) started ferrying passengers between Dieppe and Newhaven. This ferrying has been provided on a regular basis and at set times ever since 1889.

In 1880, the Freycinet master plan provided a new maritime establishment for the town, the starting point for the modern facilities to follow. The port now extended on top of the former holding basin along the River Arques Valley. Part of the Pollet area was sacrificed: streets cut off; homes knocked down; and population displaced. The opening of a passage between the outer and inner harbours created a 40m long gap. Implemented between 1880 and 1914, Freycinet’s master plan included many specific features:• The inner harbour was connected to the outer harbour via the Pollet channel; • The Grand bridge, a swing bridge and future Colbert Bridge, was build in 1887;• A half-tide basin was constructed, as well as a new wet dock; • The shipyard was set up;• A dry dock was designed where vessels could be repaired; • A tidal quay was built inside the port, dedicated to fishing activities; • The Ango bridge built in 1881 and initially a swing bridge, was upgraded into a lift bridge in 1950.The major 1880 works offered the opportunity to provide the town with a number of bridges. The Public Works Engineers erected seven bridges, three of which were railway bridges to cross over the various basins. The Colbert Bridge, a single span main rotating bridge, is the oldest of these bridges still in place. 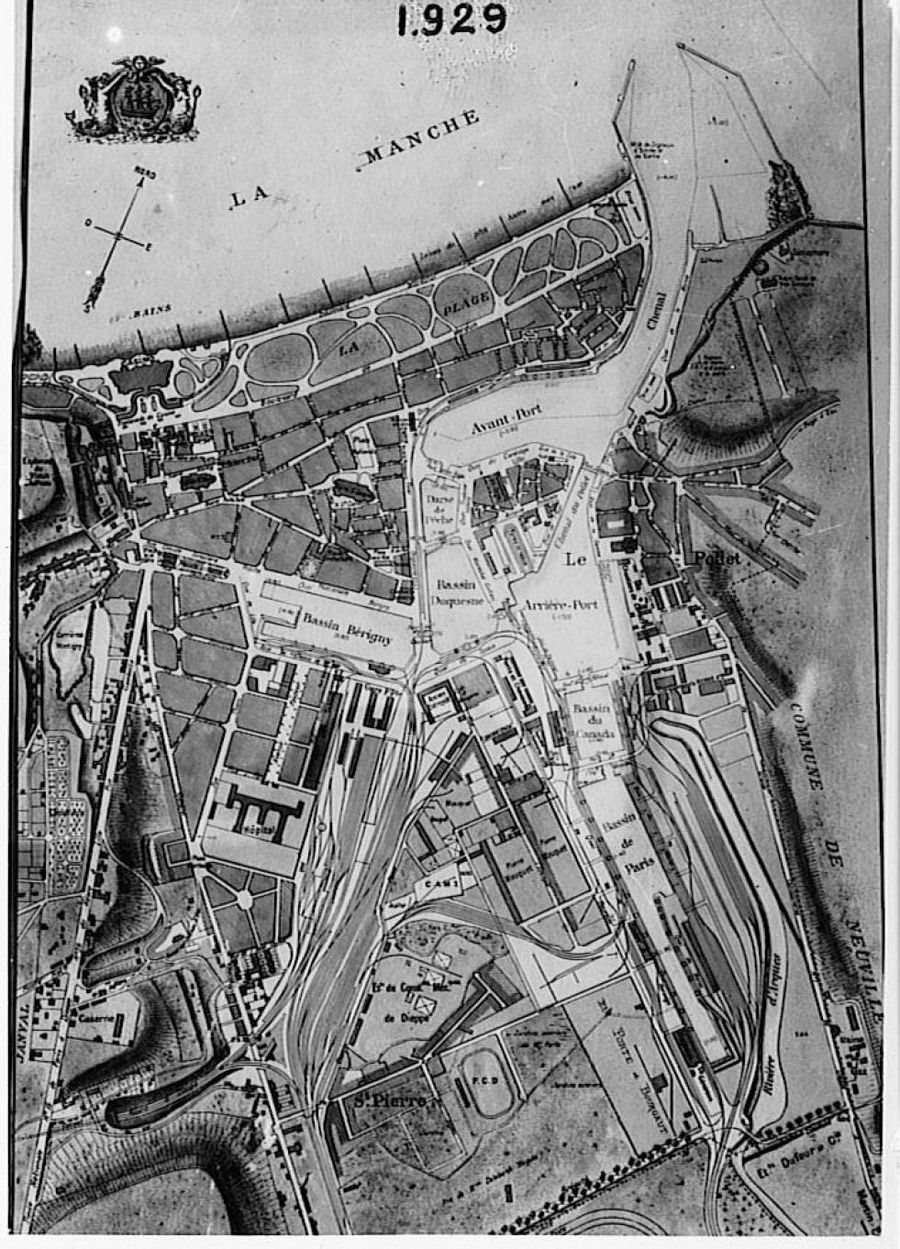 Up to the end of the First World War, Dieppe was a coal and oil port. It then became the n° 1 port in France for bananas imported from the Canaries and citrus fruits from Morocco. 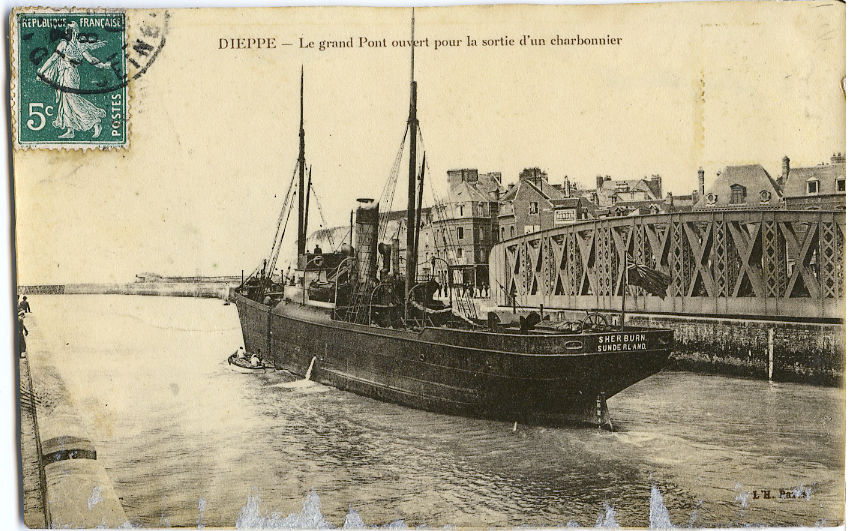 New facilities were installed during this first half of the 20th century to deal with growing activity levels. The Second World War will cause severe damage. 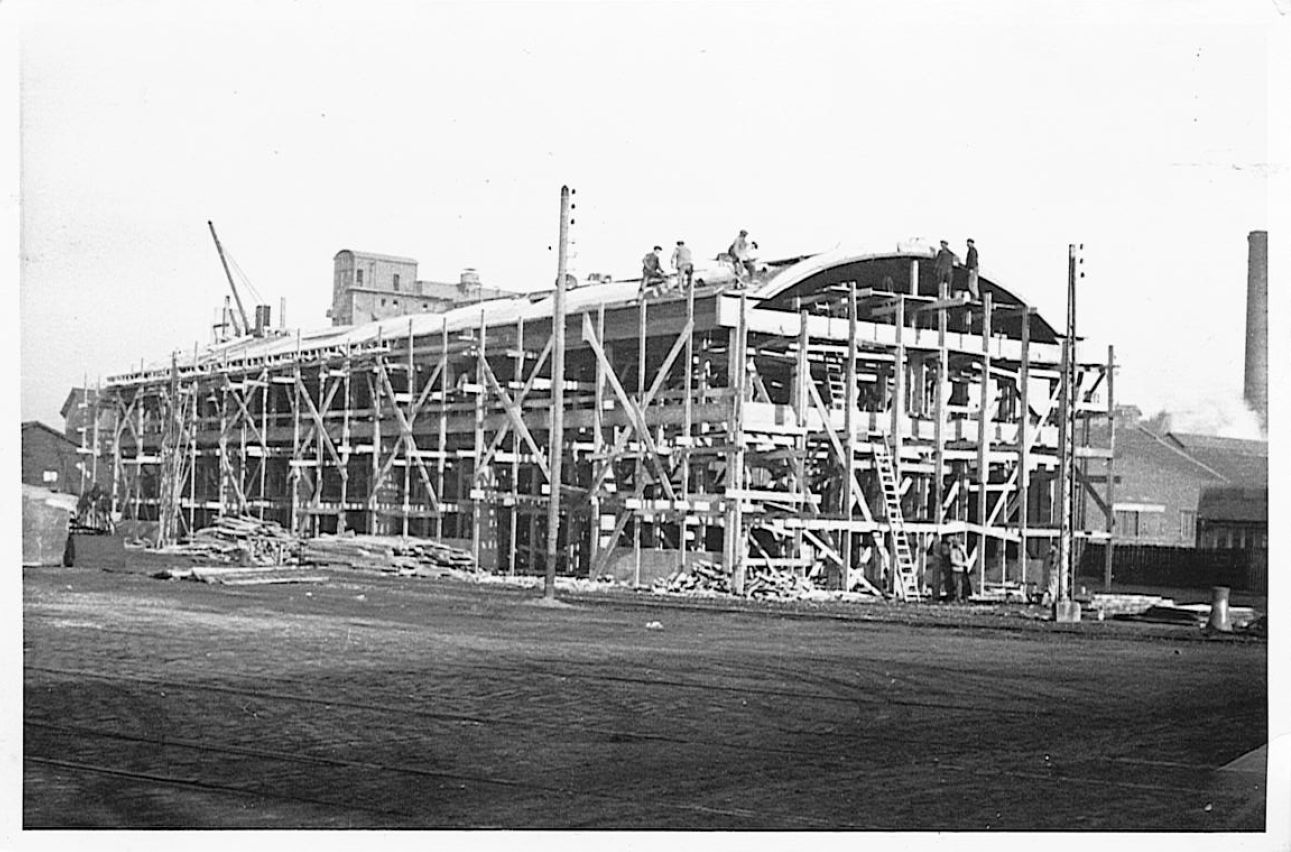 Under the auspices of the State and the Dieppe Chamber of Commerce and Industry, new buildings were erected and harbour facilities upgraded in the 1950s to deal with the increased size of vessels. 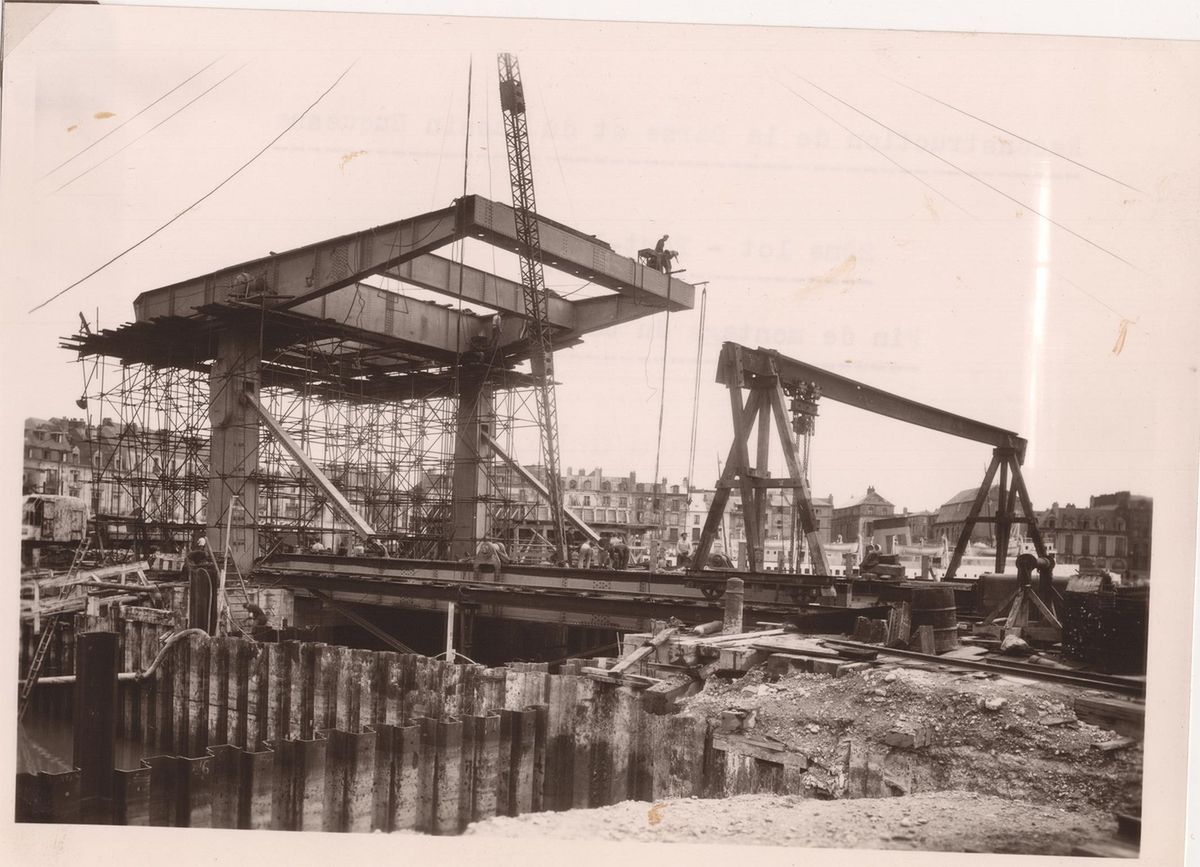 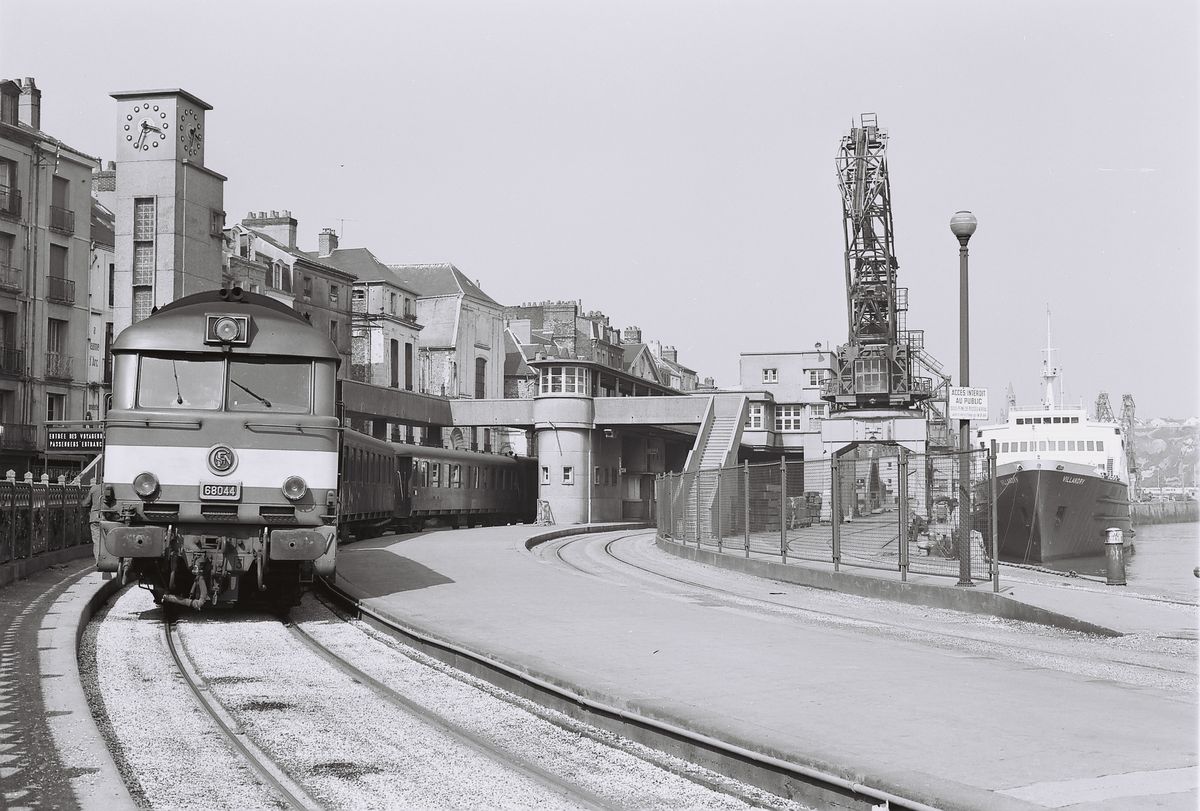 At the end of the 20th century, works took place restructuring the outer harbour to accommodate ferry traffic as well as bank gravel and sand extraction. An extension of the western pier was also built at that time. The new Cross-Channel Ferry Terminal has been operating in the outer harbour since 1994. Ferries had previously berthed along quai Henri IV. Since then, the marina has been operating out of the Ango Basin.

Public investment, leverage for port recovery initiated by Haute-Normandie Region Since its establishment, the ‘Syndicat Mixte’ of the Channel Port of Dieppe has been using public investment as leverage for the recovery of port activities. €54 million have been invested in capital expenditure since 2007 to renovate harbour installations and infrastructures. 35% of the credits from the Multi-Annual Investment Programme for 2007 to 2014 (PPI) were allocated to commerce and cross-Channel trade, 28.9% to general infrastructure, 19.8% to fishing activities and 16.2% to Leisure boating.SMPD was very proactive in urban planning and in the property management of the port’s various working and reception areas: restoration of the former marine railway station located near the Ango Basin in the city centre to accommodate the Greater-Dieppe Maritime Tourist Board next to the Marina services and the Dieppe Sailing Club; sale to Greater-Dieppe Maritime, of a former marine railway station to accommodate a Business Centre; renovation of the Feray Building on quai du Tonkin; acquisition from the Dieppe Chamber of Commerce and Industry, of the premises accommodating construction and naval repair business ‘Manche Industrie Marine’ (MIM). SMPD is a builder encouraging mixed-use developments and shared spaces. The Channel Port of Dieppe has set environmental excellence as a priority in all its undertakings. The fishing shipyard, dry port established in a former dry dock, restored quays at the commercial basin are all compliant with the environmental standards for the storage of goods, recovery of water in the case of product storage or refitting operations; the Ango building is HQE compliant, etc. Since 2010, the Blue Flag awarded to marinas has been bestowed upon SMPD for its exemplary environmental management and sustainable tourism policies, etc.

Projects anchoring the Port in modern timesThe 2015 to 2020 strategic orientations for the development of the Channel Port of Dieppe are instrumental in the modernisation of the Port’s infrastructure and facilities, as well as in the support of major regional schemes such as the construction of offshore wind farms.

The 2015 to 2020 Multi-Annual Investment Programme (PPI).Over €60 million in capital investments have been scheduled in the framework of the 2015 to 2020 Multi-Annual Investment Programme: development of a wharf for heavy packages in the outer harbour to be used by the offshore wind industry; overhaul of Ango Basin to be used by offshore wind farm service boats; building of fuelling station for fishing vessels, Cross-Channel ferries and offshore service boats; land development around dry dock to be used for nautical and tourist activities; purchase of a paint booth for naval repairs at fishing and marina shipyard; refitting Cross-Channel ferries gateway; acquisition of a new mobile crane for commercial trade; programme for maintenance and strengthening of fixed structures (quays, piers); replacement of Colbert Bridge; repair-work on mole near western pier and re-engineering of the area with sea access for nautical activities; etc.

To secure a balanced development of all maritime activities, the ‘Syndicat Mixte’ is investing so that the Channel Port of Dieppe will continue as:• A Port of reference - for offshore wind farm maintenance;• A privileged partner Port - for all local companies involved in maritime trade; • A Port acknowledged for its optimisation of Cross-Channel Dieppe-Newhaven line operating conditions; • A Port favoured for the unloading of quality products by its small-scale fishing and the promotion of King Scallops; • An exemplary Marina - fitted with a unique dry port built in a former refurbished dry dock;• A preferred Port on the Channel coast - for the quality of its public amenities and ship repairing businesses.